WHAT: The Carolina Region High Performance Teams are geared towards Elite Volleyball Development through specialized training and Elite Competition. WHO: Two teams have been selected: an 18 and under Travel Team (Juniors) and a 16 and under Travel Team (Youth). See below for teams. WHEN: HP Clinics were held May 4, 11, and 18. Players were invited for a High Performance Camp July 8-12 for training and competition. The final Travel teams were selected at the end of the Camp and the two teams traveled to Salt Lake City to compete in the 2002 Park City VolleyClassic (July 22-28). COACHES: Juniors Head - Casey Caram; Youth Head - Craig Lenniger; Youth Assistant - Ashley Powers; Juniors Apprentice - Hal Clifton; Youth Apprentice - Rory Kelly. RESULTS: Both teams competed extremely well in Salt Lake City! The teams won the first games and matches ever for the Carolina Region against other Region’s High Performance teams (both teams brough home match victories!). And we were on the verge of breaking through...the Junior team lost two five-game matches during the tournament (one to the defending Champion Florida team). The Youth team lost one five-game match as well. The Region is just at the crest towards much greater success and we look forward to continuing our progress in future years. Great job, ladies! Go here for some pictures from the trip. 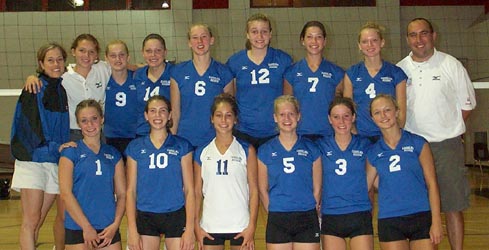