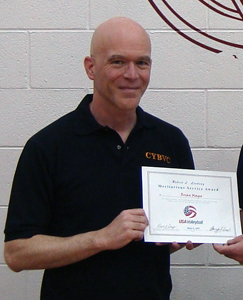 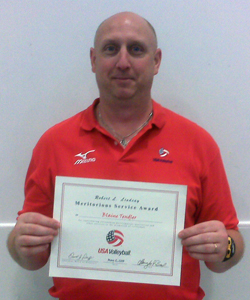 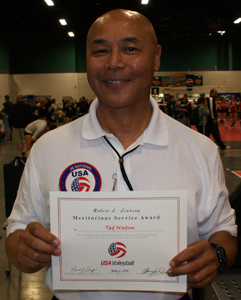 * Michael Hodge - Michael is the founder of Jammers Volleyball Club. He has been a player and coach in the Region for many years, and has worked to improve the level of play in the Durham/Chapel Hill area.
* Brian Magee - Brian is the founder of the Cary YMCA Boys’ Volleyball Club. He is a former Boys Player Rep to the Carolina Region Board of Directors. Even though his sons have aged out of Boys’ play, he is still running the Cary YMCA Boys club and has tirelessly promoted the boys’ game in North Carolina.
* Blaine Tendler - Blaine has been involved with the Carolina Region High Performance Program for many years. He also coaches with the USA Volleyball HP Program. He is the club director for Piedmont Volleyball Club. Blaine has done a lot to raise the level of volleyball in North Carolina. Blaine was also honored with the 2010 Junior Olympic Outstanding Clinician Award by the Youth and Junior Volleyball Division of USA Volleyball during the Annual Meetings in Phoenix.
* Tad Watson - Tad is a Junior National Official that has worked in the Region for many years as an official, clinician, and rater. He recently served as Treasurer of the Mid-Atlantic Volleyball Officials Board and was recognized by the PAVO for outstanding service to that organization.

If you would like to nominate someone for a 2011 Meritorious Service Award, please contact the Region Office page. Any person or group that works to promote volleyball in some way is eligible.