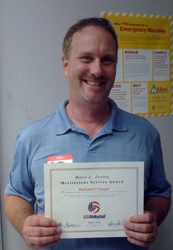 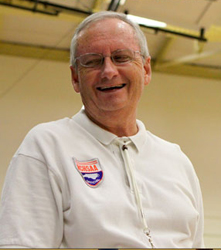 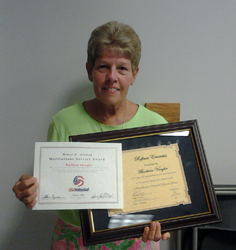 * Michael O’Connor - Michael is the current President of the Mid-Atlantic Volleyball Officials Board.  He served as Officials Rep to the Carolina Region Board of Directors in 2009 and 2010.  He holds a National Rating with USA Volleyball and has served on the National Ratings Team.  Michael has served tirelessly to mentor and train volleyball officials all over the country.
* William Sherril (posthumous) - William "Bill" Sherrill served as a High School and USAV Official for many years.  He was a Regional Referee with the Carolina Region and was in the pipeline to go for his Junior National Rating.  Sadly, he passed away on February 29, 2012, shortly after working a Carolina Region Juniors tournament.  His friendly attitude and smile will be missed!
* Barbara Vaughn- Barbara has dedicated over 40 years to the sport of volleyball.  She began officiating College volleyball in 1971 and worked through 2011.  She was able to work numerous conference and NCAA Championship tournaments over the course of her career.  She has served as a mentor and friend to countless volleyball officials across the country.

If you would like to nominate someone for a 2013 Meritorious Service Award, please contact the Region Office. Any person or group that works to promote volleyball in some way is eligible.